A US Movement Grows in Opposition to Duterte’s Rising Fascism

Los Angeles, CA – On May 11th, the International Coalition for Human Rights in the Philippines (ICHRP – US) and the Malaya Movement culminated the Stop the Killings Speaking Tour: The People’s Caravan for Peace and Justice in the Philippines with a 100-person rally in front of the Philippine Consulate in Los Angeles, home to the largest number of Filipinos in the country. Among the 100 people, a blue bus with the word “MALAYA” (meaning “free” in Tagalog) written on its windows was parked in front of the Philippine Consulate and had just traveled down the west coast to transport human rights speakers from Philippines and advocates from Seattle, Portland, and San Francisco to join the Los Angeles community in condemning the mass killings of Filipinos by President Rodrigo Duterte. The rally featured speakers of human rights experts, survivors of human rights violations, and faith leaders; street theatre and musical performances; and the delivery of a community-signed letter to the Philippine Consulate to garner their support in helping end the killings under Duterte’s drug war.“The 20,000 extrajudicial killings in the Philippines continue to climb in number,” said Pam Tau Lee, Chairperson of ICHRP-US. “But beyond the gross number of killings, we see the Filipino people are under attack. Under Martial Law and a heightened crackdown on activists, the basic rights of the people are being thwarted.  As fellow human rights advocates and faith leaders, we are glad to have done this U.S.-wide speaking tour and caravan against the killings and the growing repression in the Philippines.”

Since the Government of the Philippines’ cancellation of peace talks with the National Democratic Front amidst a 50 year civil war, a rising dictatorship has emerged under the administration of Rodrigo Duterte. On Friday of last week, Duterte consolidated power over the judiciary, legislative, and executive branches and removed his Chief Justice Maria Lourdes Sereno. This follows last year’s declaration and extension of Martial Law in Mindanao despite widespread protests.

“Why does Duterte want to centralize power? To evade accountability for the repressive three wars of his government – his war against drugs, war on terror, and all-out war against human rights activists. All of these wars should really be called the war against the poor, or war against people. Why does he continue to extend and extend martial law? To displace people, especially indigenous people resisting the presence of mining and multinational corporations who are extracting from their ancestral land. Why does he criminalize activists? To justify the termination of the peace process. Instead of addressing roots of armed conflict, he wages these repressive wars against people and ignores legitimate demands by the people to implement genuine land reform, national industrialization, and respect the rights of people”, says Raymond Palatino, a two time former Philippine Congressman who traveled from the Philippines to join the national speaking tour. Bernadette Ellorin Chair of BAYAN USA proclaims, “Beyond the killings, the people are growing more outraged over Duterte’s abuse of executive powers and fascist moves like the removal of Chief Justice Sereno. This is a page off the Marcos dictator playbook, which Duterte is not studying too well since Marcos fell at the hands of a people’s resistance to tyranny. History teaches us that dictators fall.”

The rally featured a street theatre performance by members of Anakbayan Los Angeles, a progressive youth organization, to commemorate and highlight the lives of victims killed by Philippine National Police (PNP), Armed Forces of the Philippines (AFP), and paramilitary troops. Many victims highlighted were members of peasant or indigenous organizations working towards genuine democracy in Philippines.

Alma Trinidad, Co-Convener of Malaya: A US Movement Against Killings and Dictatorship, and for Democracy in the Philippines, stated: “Our Inang Bayan/Motherland, the Philippines, needs our voice and support now more than ever. Duterte is following in the footsteps of the Iron Fist rule of former dictator Ferdinand Marcos.  As Filipinos in the United States, we must take a stand, speak up, and take action now to stop him, his mentality and sense of governance. Oppression there in the motherland is oppression here for us in the U.S.”Attendees of the rally signed a poster-sized letter that was hand-delivered to the Philippine Consulate by Trinidad and her fellow Malaya co-convenors Father Toting of St. Matthew Church and Terry Valen, the President of the National Alliance for Filipino Concerns. The letter featured the names and faces of the extra-judicial killings under Duterte and read: “20,000+ Filipinos have been killed under President Duterte’s war on the poor, the Moro, and human rights defenders. We urge you to #StopTheKillingsPH”. 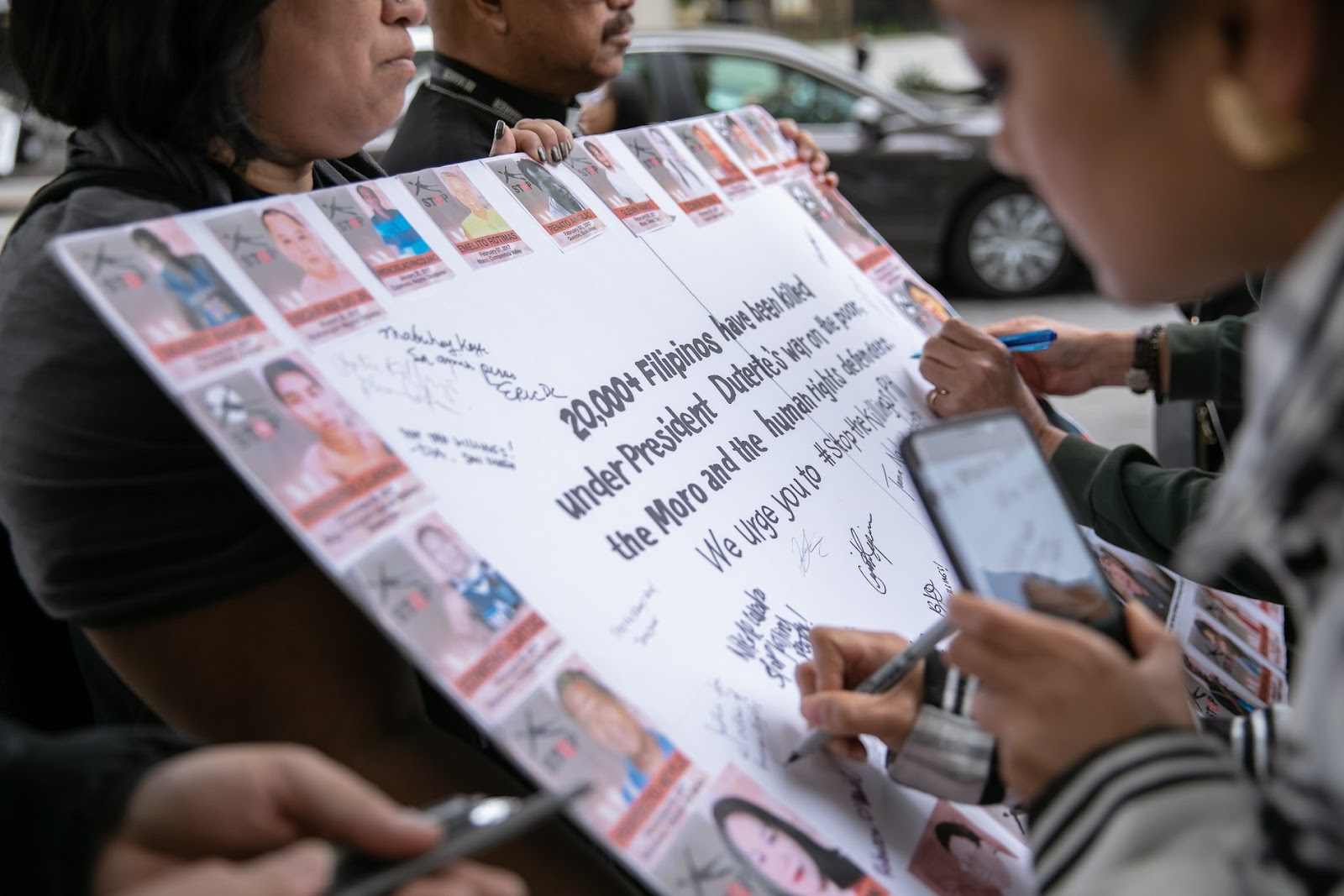 Photo: Rally attendees signing a poster-sized letter condemning the 20,000 lives killed under the Duterte regime that was later delivered to the Philippine Consulate.While the crisis in the Philippines has worsened, the U.S. has expanded support for the increasingly fascist regime. Trump has expressed admiration for Duterte and the drug war in the Philippines, and has promised more military aid while secretly beginning a new military endeavor, Operation Pacific Eagle, which creates provisions for endless spending similar to what occurred in Iraq and Afghanistan in the war on terror. In recent weeks, the U.S. provided $13.5 million dollars worth of surveillance drones to the Philippine military that continues to commit crimes against human rights defenders. “We urge U.S. authorities to withdraw U.S. military aid to the Philippines. Withdraw the drones deployed by the U.S. Army, and  stop supporting the repressive and deadly regime of Duterte. Filipinos will continue to defend our democracy, human rights, and quest for real freedom, justice, and peace”, says Palatino.

Elmer Labog – Chairman of Kilusang Mayo Uno, a democratic labor center in Philippines – added, “It is inspiring to see that in this side of the world Filipino people and American people are uniting to highlight the deadly regime of Duterte and support the Filipino struggle for democracy and change.”The tour started in Washington D.C. with Ecumenical Advocacy Days and moved on to New York and Chicago before traveling down the west coast to Seattle, Portland, San Francisco, and Los Angeles by bus. The tour is scheduled to continue on to Hawaii next month. Across these tour stops, the speakers joined meetings with congressional offices and community events to educate the public on the human rights crisis in Philippines. After the rally, Malaya Movement hosted a mixer and cultural night at Precious Blood Catholic Church wherein 150 people attended to learn more about the human rights situation in Philippines and how to build a movement to stop the killings. The mixer event had co-emcees, Filipino talk show host and producer, Giselle “G” Tongi and Roger Rigor, singer of the popular Manila disco group VST & Co.“As repression in the Philippines grows with the backing of Donald Trump, we call on all people to join the Filipino people in calling for an end to the killings in the Philippines,” said Lee. “We are seeking the broadest possible support and calling on the U.S. Senate to end US military aid to another fascist dictatorship in the Philippines. The voices of the people cannot go unheard until there is just and lasting peace in the Philippines”

View all posts by ichrpus