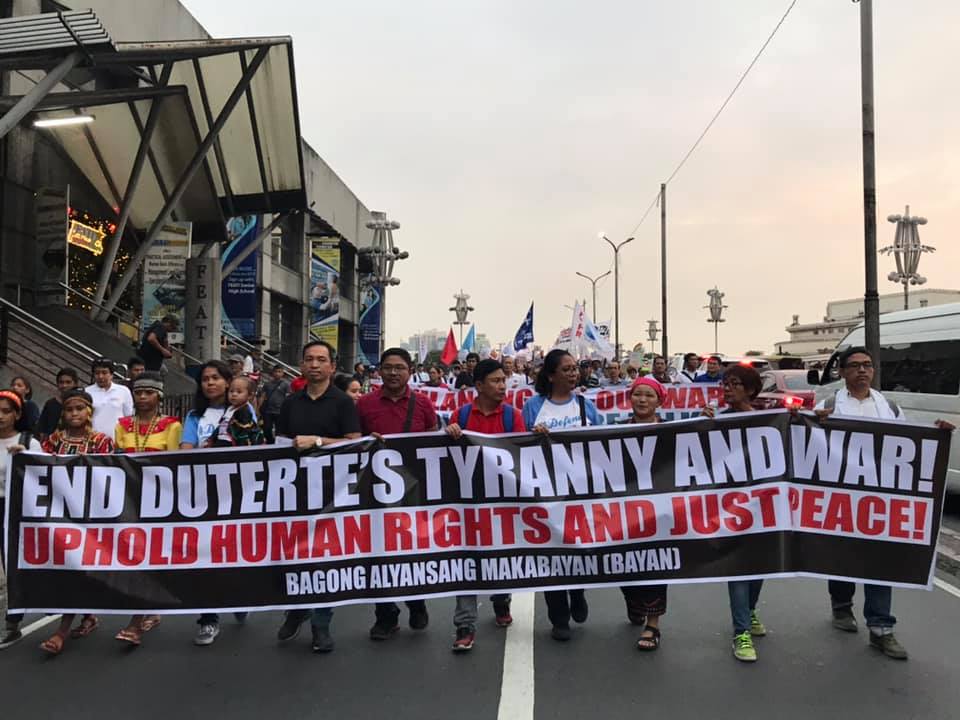 On December 10th, Rodrigo Duterte’s spokesperson announced the President would lift martial law in Mindanao two years after its initial implementation. This is a welcome development; however, under a President who has authored 30,000 killings in a war on drugs and unleashed endless attacks against human rights defenders, the move to lift martial law in Mindanao neither absolves Duterte’s guilt nor indicates a change a halt to the Presidents growing list of crimes against humanity.

The news brings further attention to the fact that Duterte has not needed to declare martial law over the whole country in order to carry out military rule; Duterte has instead implemented Executive Order 70, the National Task Force to End Local communist armed conflict, and Memorandum 32, a redeployment of state forces to “suppress lawless violence.” According to Karapatan, Duterte’s program of harassment and violence have resulted in 293 political killings, at least 204 people tortured, 429 victims of frustrated extrajudicial killings, 94,075 threatened and harassed and the arrests of 382 of the 629 political detainees in the country. As long as Duterte can continue such a level of repression with impunity, he has no need for any formal declaration of martial law.

But whatever guise Duterte uses to try and obscure his dictatorship, his attempts to dupe people in the Philippines and abroad are failing. As evident in the UN Human Rights Council investigation on human rights in the Philippines, the International Criminal Court movement towards its own investigation, the recent statement from U.S. Presidential candidate Bernie Sanders against repression of workers and unions in the Philippines, and in the growing number of people protesting Duterte worldwide, international dissent against the regime continues to grow. Even Bono is calling Duterte to accountability.

Still, there are those who lend support to Duterte. Since 2016, the U.S. has supplied $554.55 million in defense assistance to the regime. Furthermore, In a recent report from the Commission on Human Rights in the Philippines, “47 major companies, including Shell, ExxonMobil, Chevron, BP and Total, could be found legally and morally liable for human rights harms to Filipinos resulting from climate change.”  Whether it is President Trump or multinational corporations, only those who seek to profit from the exploitation of Filipinos align with Duterte. In the end, those who do win financial gains from political repression are far outnumbered by those of us who support and uphold human rights in the Philippines; what remains for us is to organize more broadly and boldly.

On International Human Rights Day, ICHRP-US declares our unequivocal solidarity with the Filipino people, and we voice our support not only for individual and civil rights in the Philippines, but to the Filipino people’s collective right to self-determination and national liberation. While millions of dollars flow to U.S. defense assistance and multinational corporations that exploit people and their land, we call on people in the U.S. to join the solidarity movement for the Philippines and support the Filipino people’s struggle, not U.S. war and exploitation!

View all posts by ichrpus